The Demise of Putting on Tour


While perusing the improvements in golf equipment over the years, I came across data analysis that caused several rereads! Using Shotlink data, I looked at putting stats on Tour

from 2003 to now. Using putts made at specific distances, the make percentage is LOWER today than 2003! Given the advances
over the last 15 years, better, more consistent greens, millions of dollars invested in putter head designs, contour books showing every break every grain pattern and not the least, the arrival of sophisticated putting instruction, my first reaction was "this
can’t be right."
The chart below speaks for itself. Putting has declined. These are the averages for three early years and the last three years. All Shotlink data was taken from the PGA Tour. I recruited Jim MacKay as my expert data analyst. Jim is a golf industry
veteran who has been working with tour players and these putting stats for 20 years.

The data confirms that putting on Tour has declined.  The information in the chart above was pulled from

Shotlink.com.
WHY? The numbers didn’t have lots of peaks and valleys indicating, one significant factor that was having a broad, negative effect on performance.
Before I state my case, two caveats. First, things are going to get a little technical, so hang in. Second, I will be mentioning a product with which I’m involved.

The first thought was green speeds. I asked several Tour players and instructors and the overriding conclusion was that green speeds have definitely increased and also dramatically improved. So, it was determined that this would not have been a broad
enough factor to affect a widespread putting demise.
Then why? As greens got smoother and faster over the years the philosophy behind the putting stroke developed into a smooth pendulum style. To augment this, putter designers increased the MOI of their heads while adding weight.
One thing changed dramatically and the other stayed the same and therein lies the answer. The steel putter shaft was introduced almost 90 years ago and I‘ve been putting with them for over 60 years. How many things in this world have virtually
unchanged for 90 years? Over the years, quality instruction on the stroke coupled with the modern technology of heavier heads increased the stress factor which interfered with the face returning square at impact.

So, we postulate; can weak steel shafts cause face oscillation? Yes! They are in direct conflict with the heart of today’s smooth stroke; they don’t allow putter face to consistently return square at impact. We cannot stop here. The theory must be
proven.
Breakthrough Golf Technology has a golf lab with perfect greens, a putting robot and

advanced software for analysis. You must have this kind of environment to isolate and measure the discrepancies. We traced
history, lighter heads to heavier on steel shafts and watched the face deflection increase. When we introduced the Stability Shaft into testing, the face angle problem disappeared regardless of head weight. When we had Jim MacKay retest at his facility and
he verified the results.
We see players holing putts all the time on TV. Yes, it’s a selection process. TV executives aren’t going to gain viewers by showing a bunch of misses.
How about when we read that someone has putted in an extraordinary fashion. The error factor discussed is slight, and short-term success happens, but it is negated over the long haul.

Am I trying to make a big deal out of something that’s very minor just to sell shafts? Do these tiny differences really cause a huge impact? I arbitrarily took six PGA Tour players around the mid-point of the money list and calculated what just one
shot less in a tournament would be when translated into money earnings.
The result astounded me; the average amount per player was over $500k for the season! That was only ONE shot better in a 72-hole event, so while the percentages don’t look huge, when you convert them to dollars on Tour it’s the kind of result that
makes you double check the math.
Working with Tour players is challenging; they don’t like to mess with their equipment and like many professional athletes are insulated by a team of coaches, agents, trainers and tour reps that often make them unapproachable (especially since we
don’t pay). With that said, the performance of the Stability shaft has done well, since it is the fastest growing shaft on tour. Not many realize this because we don’t ‘pay to play’ and can’t advertise the names.

where they can go through a complete putter analysis. They will experience first-hand how the Stability Shaft fits any putter head and has proven
performance over a steel shaft. Best of all no player adjustment. Yes, it’s the only putter shaft in golf that mitigates face movement without being super heavy or something causing a major player adjustment
To all amateurs; the data used here is taken directly from the PGA Tour, who are considered the best putters in the world. Amateur improvement would be several factors greater. With all the industry attention to distance, an old line comes to mind
"Drive for show, putt for dough."

CHAMPION GOLFERS’ CHALLENGE DRAW RELEASED AHEAD OF THE OPEN 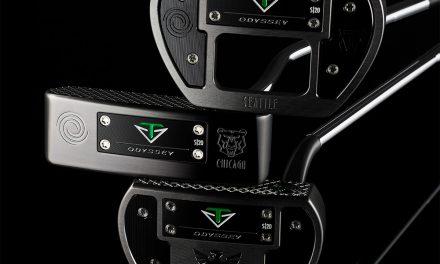